The Story of Purim

A retelling based on the Book of Esther

The story began long ago in fourth century BC, Persia. The king was throwing a banquet in honor of all his princes, servants, his generals and the aristocracy. For 180 days they feasted and admired the king’s wealth and splendor and drank to their heart’s content. The king, who also had a generous share of wine, decided to show off the queen, Vashti; however, she refused to come when summoned.

According to the Midrash, Vashti was the daughter of Belshazzar of Babylon and the great-granddaughter of Nebuchadnezzar, who destroyed the Temple. She was very vain. Being the former princess of Babylon, she thought herself greater than the king.

The court was aghast by her refusal to appear before the king. Surely this was not how a queen should behave. For if the queen could defy the king, then how much more would wives defy their husbands? The king was furious with her, so he banished her and issued a decree that all wives were to obey their husbands.

Time went on and the king began to long for a queen. A new one must be procured. Maidens were summoned from all over the empire and were subjected to beauty treatments in hopes that one would catch his eye. Lo and behold out of all of the fair and beautiful maidens, the king chose a girl called Esther. She was young and becoming and favored by all those around her. The king crowned her queen in place of Vashti. Unbeknownst to him, she was Jewish whose other name was Hadassah — an important detail for things to come.

Now Esther had a cousin by the name of Mordechai who had raised her as she was an orphan. Mordechai would often sit by the king’s gate and inquire after Esther. One day while he sat by the gate, he overheard two of the king’s eunuchs plotting to kill the king. Mordechai was greatly troubled by what he had heard, so he told Esther. Queen Esther then informed the king. After it was investigated and found to be true, it was off to the gallows for the would-be assassins.

A while later, a vile and arrogant man named Haman, who had recently been promoted to be the king’s right hand man, thought himself so great that all shall bow to him as he passed through the streets. One man, however, would not bow — a certain Jewish man by the name of Mordechai. How this irked Haman. He grew to hate Mordechai and all his people. Using his influence, he whispered in the king’s ear that there were certain people within the kingdom who followed their own laws and did not obey the king’s laws— after all it was the king’s order that all must bow to Haman. He suggested that these people shouldn’t be tolerated and should be exterminated. The king agreed, so he gave Haman his signet ring and the power to do what he wished with the people who dared to defy the king.

Haman was an Agagite, a descendant of King Agag of the Amalekites whom Hashem had ordered King Saul to destroy as they attacked the Israelites when they were in the wilderness. Haman carried this hatred from his ancestors which had been allowed to fester as Saul had spared Agag.

The lot had been cast. The decree had been issued that on the thirteenth day of the twelfth month, Jews throughout the kingdom, men and women, young and old, were to be slaughtered and their possessions plundered. 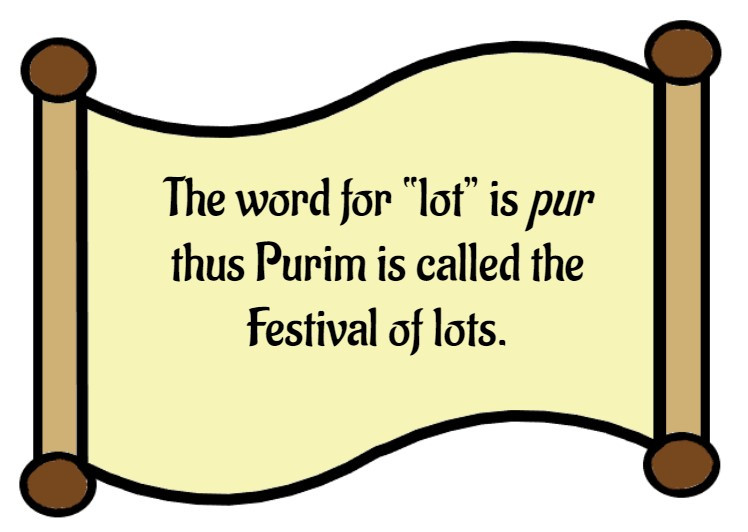 The Jews were confused. In eleven months their neighbors would be permitted to kill them. They could not believe that their friends and fellow countrymen would want to destroy them.

When Mordechai heard the decree, he tore his clothes, put on sackcloth and ashes, and cried aloud in the middle of the city. Queen Esther, who had not heard of the decree, was troubled by her cousin’s behavior. She sent clothes for him so that he may approach the king’s gate, but he refused them, so she sent one of the eunuchs to learn what distressed him. Mordechai told him everything. The eunuch reported back to Esther who replied that anyone who went before the king unsummoned would be executed unless the king extended his scepter to them. She had not been summoned in thirty days and it seemed unlikely that she would be anytime soon.

Mordechai conveyed to her that she must not think that her position will protect her and that if she was silent, deliverance will come from somewhere else while she and her house perished. Who was to say that this wasn’t the very reason she was put in this position?

Esther instructed Mordechai to gather all the Jews in the city and fast for three days. She and her maids would do the same and then she would go before the king even though she could very well be put to death.

It is believed that Mordechai was a member of the Sanhedrin, naturally making him a leader of the Jewish community in Shushan. He led the Jews in fasting and praying which led to repentance and returning to God.

On the third day, Esther went before the king. She found favor in his eyes, for he extended to her the golden scepter and permitted her to speak. Her request was for the king and Haman to join her for a banquet. At the banquet, the king asked her her request. She answered that she would tell him if he and Haman came to another banquet the next day. The king spared her hence she owed him her life and as such she believed it wise to make her request at the following banquet.

Haman left happy. He had everything going for him, money, power, a large family, but now not only did he have the king’s favor, he had the honor of attending the banquet of the beautiful queen. Indeed his pride was stoked. Yet his delight quickly soured when he saw Mordechai sitting at the gate. Mordechai didn’t even acknowledge him. How he was infuriated. Later that day, he bragged to his friends and family about his status but then went on to tell how it was all worthless because one man could not care less. His wife, Zeresh, suggested that he build a very high gallows, tall enough that it could be seen from the palace, and tell the king that they should hang Mordechai on it. This pleased Haman so he set to work straight away.

That same night, the king could not sleep so he asked that the book of records be read to him. Perhaps the droning words of the records would lull him to sleep. As the records were being read, the king was reminded that Mordechai had uncovered the eunuchs’ plot to kill him. So he asked what had been done to honor Mordechai for that. Nothing had been done.

The next day when Haman arrived to asked the king to hang Mordechai, the king asked him what should be done to the man whom the king wants to honor. Haman thought surely the king wished to honor him, so he suggested that the man should be clothed in a robe the king himself has worn, paraded through the streets on the king’s horse, and escorted by the king’s top officer proclaiming ‘This is to be done to the man whom the king wishes to honor.’ There could be almost no greater display of honor than this Haman thought as he imagined himself being marched through the streets. Then the king told him to do all that he suggested for Mordechai.

Haman begrudgingly obeyed and so Mordechai was paraded through the streets of Shushan. The God-fearing man, Mordechai, who was going to be hanged, instead became the most honored man in the empire. The humiliation Haman must have felt, for he returned home sad with his head lowered in shame. He cried to his wife and friends about how his glory was taken from him. But there was no sympathy for this proud fool, for they told him he could not win against Mordechai now.

Then came the time for Esther’s second banquet. With both the king and Haman in attendance, she made her request. She spoke the word king twice, once to Hashem, the King of the universe, and another to the king of Persia, and interceded for the life of her people for they had been marked for destruction, herself included. The king asked who would do such a thing and the queen answered that it was Haman.

Haman was terrified. Everything was crumbling before him and knew that the king planned to kill him. The king left the party enraged. Haman approached the queen and begged for his life. When the king returned, he was furious to find Haman falling on his wife’s couch. The guards came and apprehended Haman, covered his head for execution, and then informed the king of the gallows Haman had built for Mordechai. The king ordered for Haman to be hung on it instead.

Even though the evil Haman had been executed, all was still not well. His property had been seized and his position had been given to Mordechai, yet the diabolical decree was still in effect. Esther pleaded with the king to overturn the decree, but the king replied that any law written and sealed in the king’s name cannot be taken back; however, a new law could be written to counter another.

Thus a new law was written that on the thirteenth day of the twelfth month, the day marked for destruction, the Jews were permitted to gather together and defend themselves against whoever might attack them. The new law went out throughout the empire with haste, filling every Jew with joy and gladness.

Deliverance had come for God’s people. When the day came, the Jews defeated their enemies. Five hundred of their enemies were killed in Shushan alone, along with Haman’s ten sons, and all the nations became afraid of the Jews especially Mordechai, who was now the most powerful man in the empire aside from the king. What was supposed to be a day of great evil turned into a day of triumph for the Jewish people.

Ladies and gentlemen, let us not forget the most important player in this story which is Hashem. Although His name is not mentioned once in the Megillah of Esther, we see His hand everywhere. The miracle of Purim came through due to prayer, fasting, and repentance from sin. God showed His mercy and set the pieces in place for deliverance. Let us remember how God rescued His people from the hand of their enemies and has continued to do so throughout the ages.